Behind the image we have of Cambodia that is summarized in many cases in a picture of the Temples of Angkor, there is a terrible story of genocide. A country that lived under the rule of the madness of the Khmer Rouge and that was forced to abandon all its cities.

Before traveling to this beautiful country, I recommend you learn a little about its most recent history through a selection of literature on Cambodia. These are the books that I have read and that I recommend:

It is a good book, with many time jumps, but perfectly spun that entertains and is a good start to enter the terrible period that Cambodia lived under the rule of the Khmer Rouge.

This book looks at how a small and poor country in Southeast Asia faces today, thirty years later, one of the most tragic and dark events in the world history of the 20th century. The period when the Khmer Rouge wanted to rebuild a Cambodia ravaged by US bombing from the rice fields. A regime where utopia and genocide seem to be confused in the middle of the cold war. A period in which a third of its population died victims of bombings, political purges, forced labor, hunger and curable diseases. Mark Aguirre has lived in Phnom Penh for the past three years. The years when the United Nations Court that tries the leaders of the Khmer Rouge was established in the Cambodian capital. What has allowed him to be a direct witness of the difficulties that Cambodians have to face their own past, a yesterday whose consequences continue to mark today’s society and Cambodia’s insertion into world politics.

If you want to buy this book, click on: Cambodia: The Legacy of the Khmer Rouge 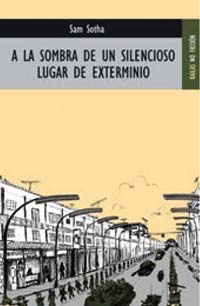 In the shadow of a silent place of extermination
Sam sotha
Kailas, 2008

They are the memories of a Cambodian and his life during the Pol Pot regime. Before reading this book it is convenient to have read “Cambodia. The legacy of the Khmer Rouge ”to put you historically better.

In 1975 the Khmer Rouge regime in Cambodia took control of the capital Phnom Penh and began one of the largest genocides in human history.
The army expels several million people from the city, including Sam Sotha and his wife. This humble couple managed to survive the genocide, but suffered the exploitation, starvation and tyranny that were daily practices of the Pol Pot regime.
The author accompanies his story with illustrative drawings that he himself made while suffering the terrible situation that he managed to survive, and that are interspersed in the text as a graphic and personal complement.

If you want to buy this book, click on: In the shadow of a silent place of extermination (Non-Fiction) 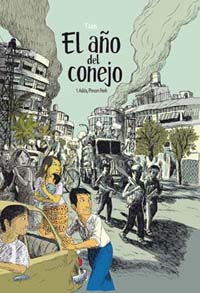 The year of the rabbit
Tian
Sins Entido, 2012

Book in comic format, in the entire comic only the first days of the expulsion from Phnom Penh appear. It is the first of a trilogy.

Phnom Penh, April 1975. The Khmer Rouge seize the capital and power. Like all the city’s residents, Lina – about to give birth – and her family are in Phnom Penh. Suddenly, the poor are moving around in the Cambodian countryside, trying to survive in the confusion, and little by little they are becoming aware of what this revolution means. If they understand that their life will never be the same, they are still far from imagining the tragedy of their country… The true story of the Khmer Rouge years. Tian tells the story of his family and recounts the life of Cambodians during the dictatorship, with a sensitive, but at the same time, objective treatment.

If you want to buy this book, click on: The Year of the Rabbit 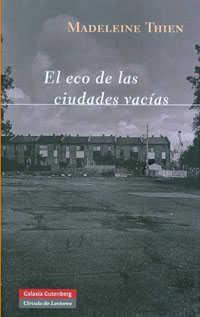 Good book that, in two stages, takes you back to the hardest moments in Cambodia and its consequences.

One winter, Janie, a researcher in Montreal, suddenly abandons her husband and son, seemingly for no reason. He takes refuge in the home of his friend and mentor, neurologist Hiroji Matsui, who has mysteriously disappeared.
As she moves through Hiroji’s belongings, Janie discovers fragments of her friend’s past and, little by little, her own. With her, the reader travels to the Cambodia of the seventies, where Janie, then a child, lived the consequences of the terror of the Khmer Rouge. And where a brother of Hiroji, a Red Cross doctor, disappeared.
The stories of Janie and Hiroji and their brother intersect in an intimate and profound tale of escape and survival. Through them, the book evokes totalitarianism seen through the eyes of a girl and traces a map of the battle that fights memory facing the loss and horrors of war. Trapped by the memories she thought she left behind, Janie seeks salvation in a world darkened by the horrors of the past.

If you want to buy this book, click on: The echo of empty cities

No comments to show.